Mahjong, a traditional Chinese game of four players, is by no means unfamiliar to Chinese people and some peoples from different cultures

Speak the language and understand the culture! 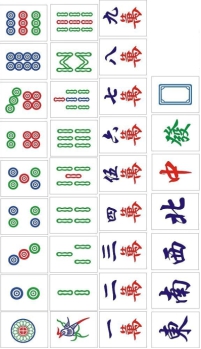 Mahjong, a traditional Chinese game of four players, is by no means unfamiliar to Chinese people and some peoples from different cultures. It was contrived by the ancient Chinese and has been passed down through centuries till today, exerting its special influences upon the lives of both Chinese and more and more foreigners today. Mahjong, in many respects, provides a window from which we can perceive Chinese culture and Chinese people’s personality. It is therefore one unique instrument on both game table and the study-desks of those who are interested in comparative culture studies. Yet, Chinese people and her culture, as time goes by, by no means remain intact as the rule of mahjong does.

The game is played with tiles rather than playing cards. The aim is to be the first player to get a complete four sets of three and a pair. The rules for playing and scoring vary drastically between different parts of China. Similar to the Western card game rummy, mahjong is a game of skill, strategy, and calculation and involves a degree of chance.

Here at Beijing Mandarin School you can study not only oral Chinese but also Chinese mahjong classes. We believe that your experience of learning mandarin and living in China can be enriched by learning about Chinese culture.

Each of our Chinese mahjong classes is at least 2 hours long. And it just cost you 260 yuan each time.

Come to see how fun the Chinese learning is!